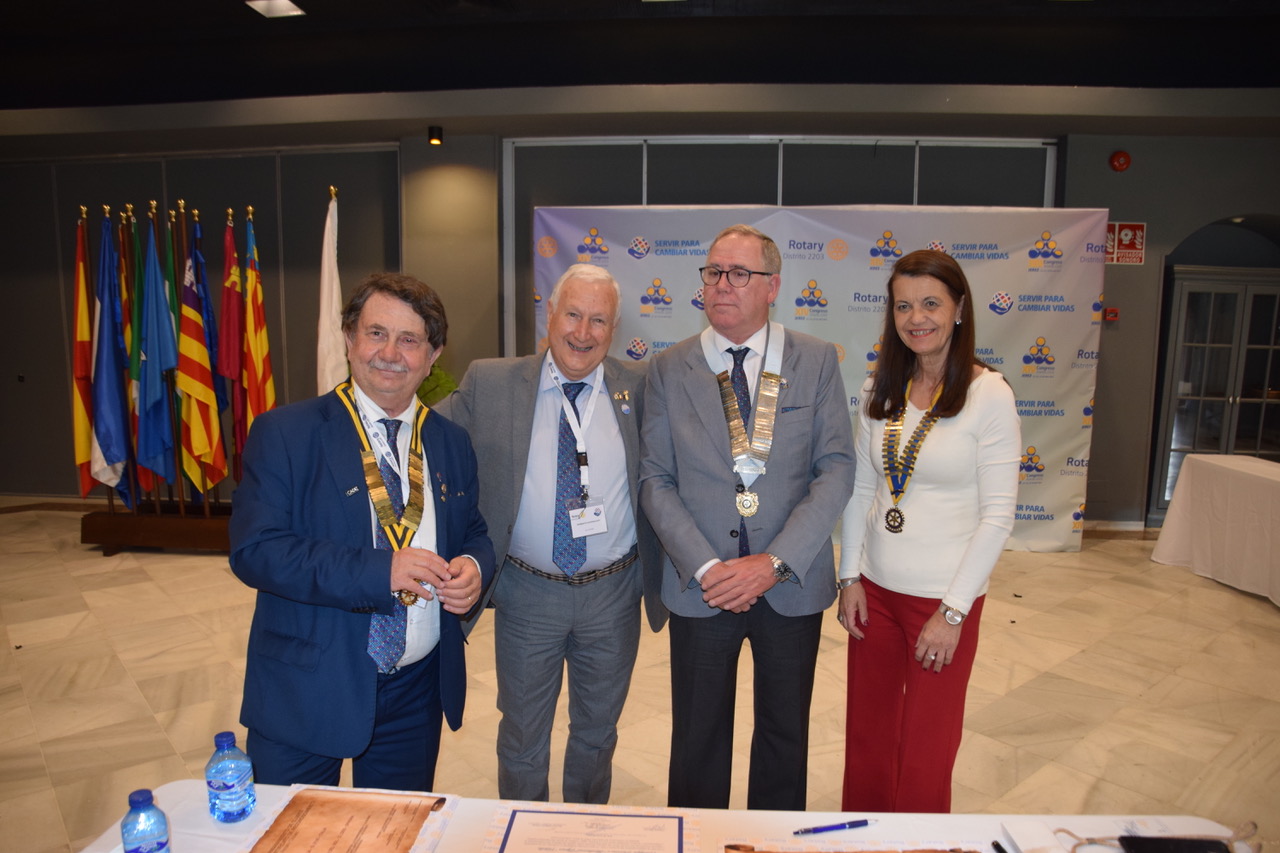 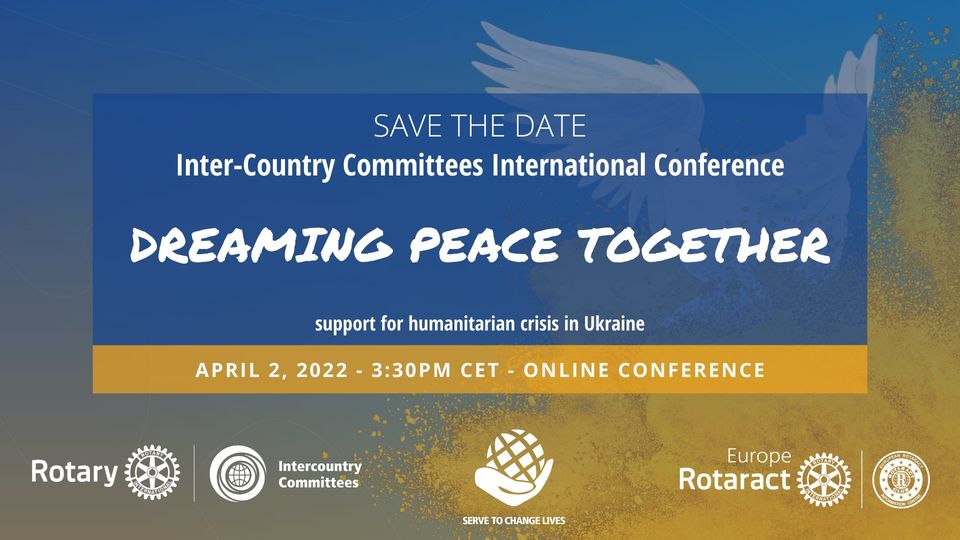 Event organized by the ICC Executive Council in partnership with Rotaract Europe MDIO (ERIC - European Rotaract Information Center) and in replacement of the ICC International Conference and General Assembly in Kiev (which was scheduled for 1-2-3 April 2022). 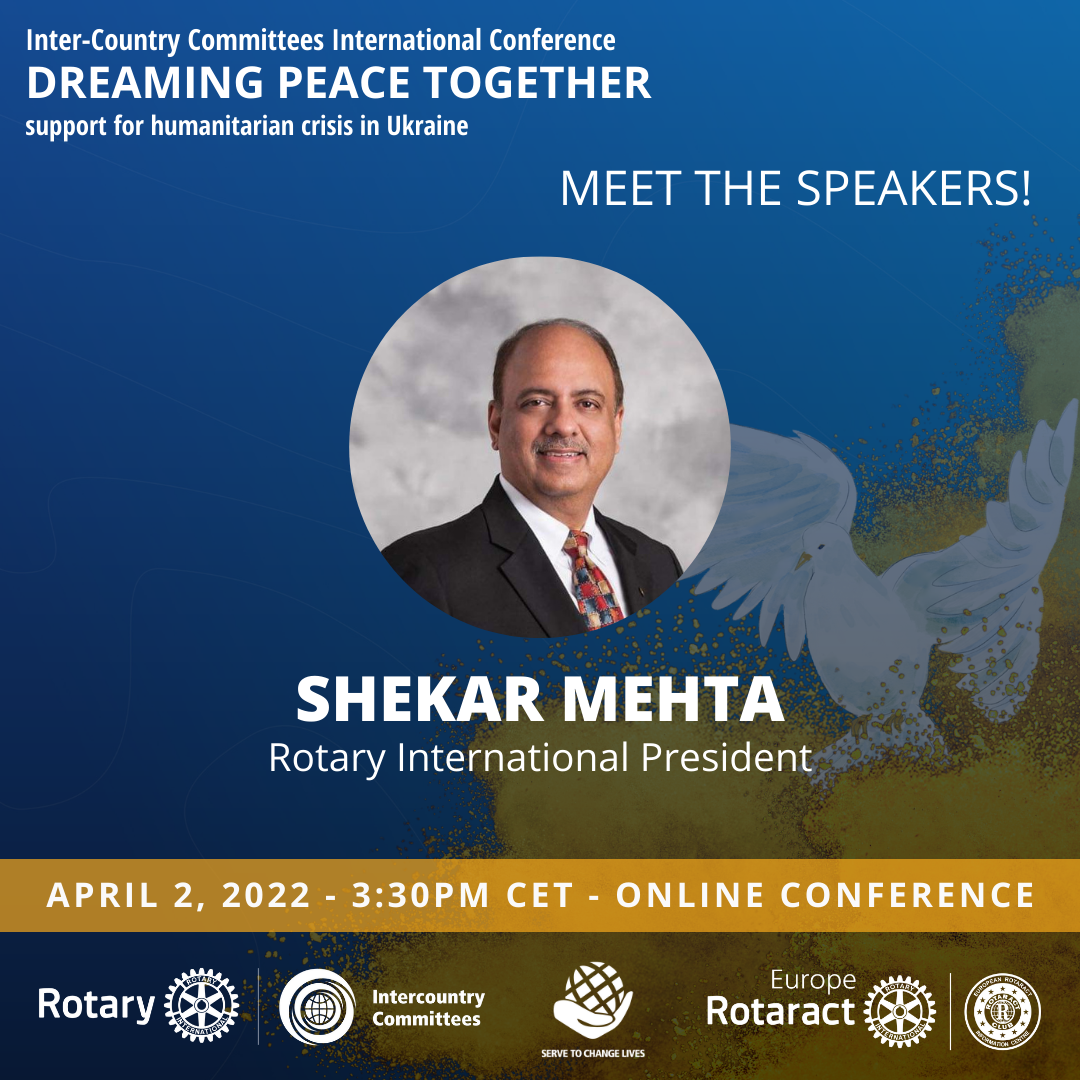 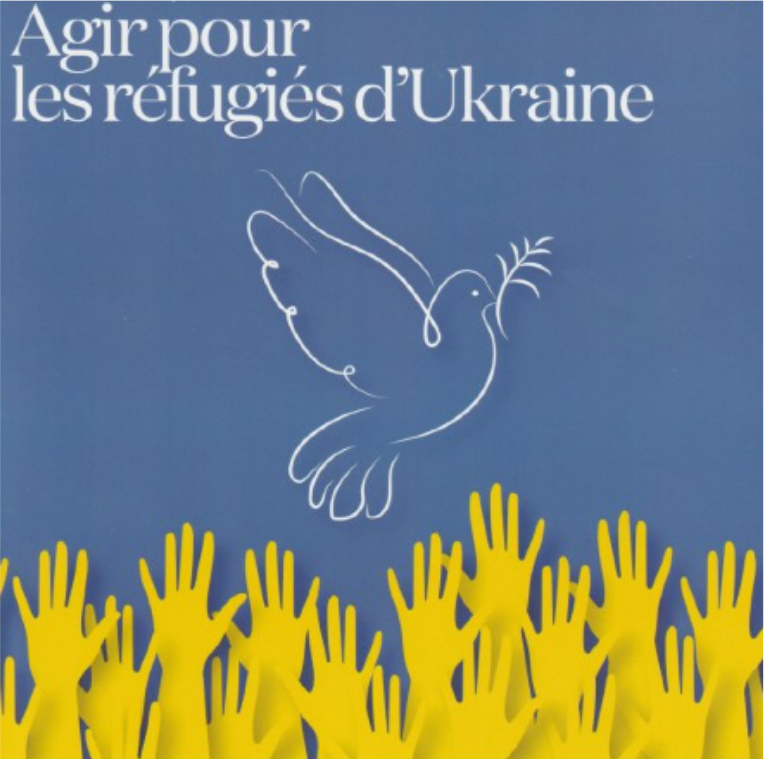 This event was also a call for donors around the world to contribute funds to support the relief efforts underway through the Rotary Foundation Disaster Response Fund and the Rotaract Europe Help account.
Participants were able to interact with each other via the chat on the YouTube page and interesting comments were put on the screen.

---> Video recording of the event

Meeting of the Rotary Inter-Country Committees Executive Council with the Chairs of the ICC National Sections connected with Ukraine - March 2, 2022
Virtual meeting using the Zoom platform

A Zoom Meeting took place on Wednesday 2 March 2022 with the Chairs of the ICC National Sections connected with Ukraine, organized by Cyril Noirtin, Chairman of the Rotary Inter-Country Committees Executive Council, with the aim of sharing existing or planned projects and see together how we can help actions and coordinate our efforts.
This meeting was attended by Alessandro Pastorini, ICC National Coordinator of Italy, Malta and San Marino, and Antonio Ernesto Rossi, Chair of the Italian Section of ICC Italy, Malta, San Marino / Ukraine.
Participants at the meeting were informed that Rotary International has created a special Committee, led by the Rotary International Director of Zone 21/22 Kateryna Kotsali Papadimitriou, to coordinate global assistance to Ukraine.
RI Director Kateryna Kotsali-Papadimitriou, present at the meeting, announced that Rotary International has established a Disaster Response Fund, an official channel for contributions to support the relief activities for Ukraine (aimed at supply of water, food, medicine, shelter and clothing) by Rotary districts which will be given priority until April 30, 2022.
Contributions to the Disaster Response Fund can be made by connecting to:
https://my.rotary.org/en/disaster-response-fund 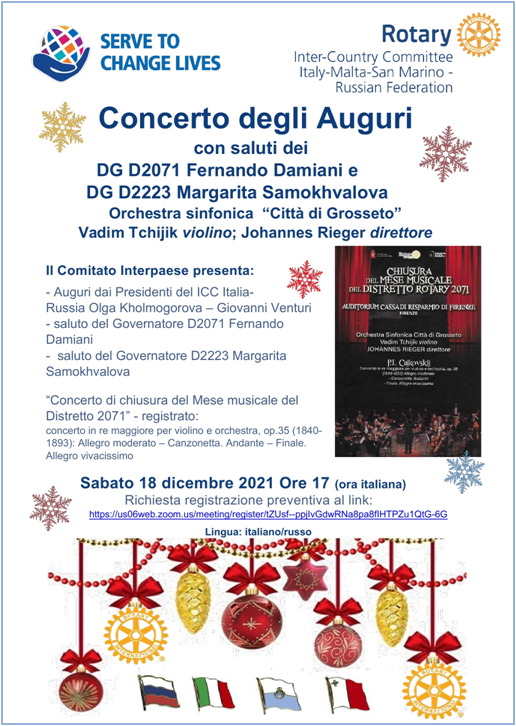 Event organized by the ICC National Sections of Italy, Malta, San Marino and Russian Federation.
Closing concert of the Musical Month of the Rotary District 2071. 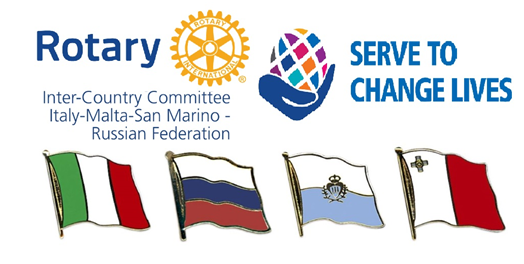 The meeting on the Zoom platform was organized on Saturday November 13, 2021 by the Italian Section of the Inter-Country Rotary Committee of Italy, Malta, San Marino and Russian Federation with the aim of raising funds for the End Polio Now program of the Rotary Foundation for the eradication of polio in the world.
Referring to the Rotarian theme of the month of November dedicated to the Rotary Foundation, the organizers wanted to involve the participants, enrolled in the ICC Italy - Malta - San Marino - Russian Federation, Rotarians and friends, in the initiative launched by a long-time Rotarian from Florence Luigi De Concilio, aimed at making known the territory in which he lives and the possibility of raising funds for the End Polio Now program. Luigi De Concilio is in fact the author of two books on legends, stories and curiosities of the city of Florence (Firenze Bizzarra) and of the Casentino area (Curiosando in Casentino) whose sales proceeds are totally devolved to End Polio Now.
With the presentation of the two books the organizers wanted to stimulate not only the purchase of the two volumes, which represent a nice and alternative "guide" to the visit of the city of Florence and the Casentino area, where Dante Alighieri  spent a good part of his life (this year is the 700th anniversary of his death), but also to stimulate the possibility of "copying" this initiative by writing texts that guide and tell about the curiosities of our places of life, always to be allocated to the fundraising initiative for the Rotary Foundation.
The aspects of the meeting focused were: the Rotarian purpose of fundraising, the literary initiative and unique tourist promotion on symbolic places of Tuscany, to be replicated elsewhere, the references to Dante's life in his 700th anniversary.
All this was developed in the meeting with two introductory interventions by Olga Kholmogorova (R.C. St. Petersburg White Nights, District 2223), Chair of the Russian Section of the Rotary Inter-Country Committee Italy - Malta - San Marino - Russian Federation, as well as National Coordinator of the ICCs of the Russian Federation, and Giovanni Venturi (R.C. Ancona Conero, District 2090), Chair of the homologous Italian Section of the Committee, and with the contribution of Saverio Lastrucci (R.C. Firenze Certosa, District 2071), Secretary of the Italian Section of the Committee and organizer of the event.
After a brief speech by the publisher of the two books, a Rotarian of the R.C. Florence Antonio Pagliai, who indicated how and where to buy them online, it was broadcasted the video of the President RI Shekhar Metha made on the World Polio Day of October 24, 2021 on the almost reached eradication of polio in the world and on Rotary's continued commitment to eliminate residual cases in Pakistan and Afghanistan. 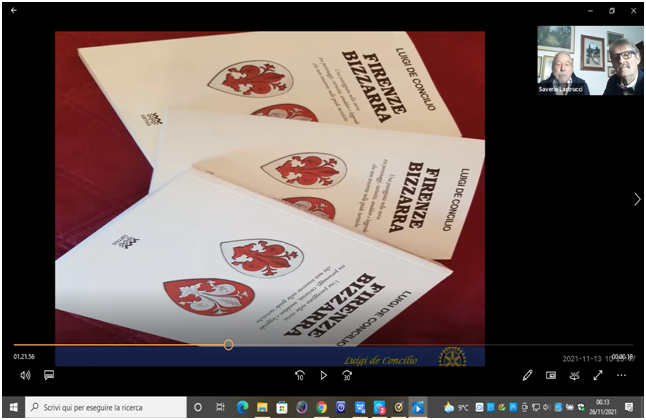 So Luigi De Concilio very pleasantly presented the two books with the main passages and references, more witty and curious of the places in Tuscany. The author illustrated the images of the places and focused on artistic, historical and gastronomic curiosities described in his volumes, to arouse the interest of the participants in the meeting and to stimulate them to visit and get to know better, also for the benefit of the Russians friends who love Florence and Tuscany (Rotarians from Vladivostok were also present in this virtual meeting), places, anecdotes, corners and itineraries other than ordinary and simple visits organized by tour operators. 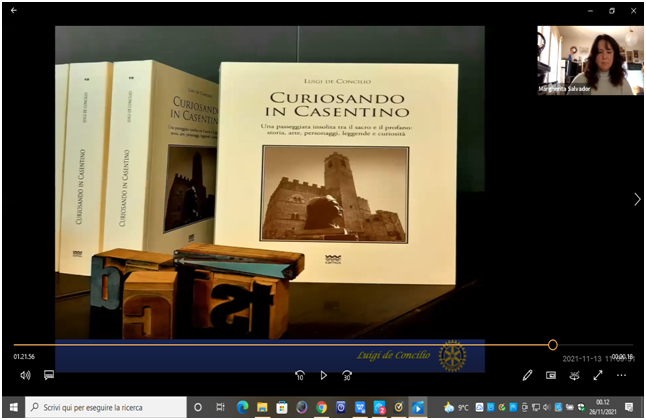 ---> Video recording of the event 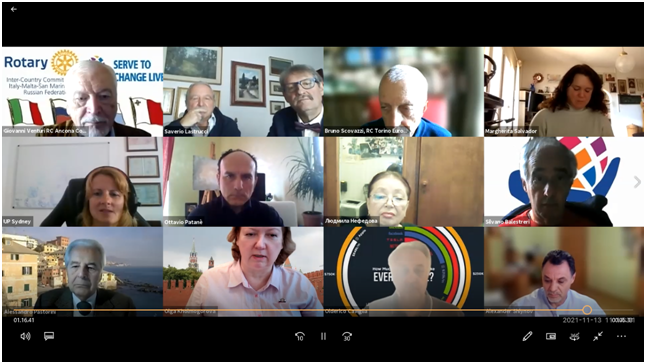 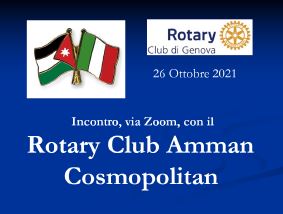 The President of the Rotary Club of Genova Mario Riccomagno opens the meeting at 12.45 with a cordial welcome to all Members and reminds that the celebrations of the World Polio Day took place on Sunday 24 October 2021. On that day, a celebratory meeting was held proposed in live streaming by all the Rotary Districts of Zone 14 and many Rotarians took a walk in the center of Genoa, starting in Piazza De Ferrari, wearing red Polio t-shirts. In addition, for this occasion, the central fountain was also colored red.

The fight against polio has been carried out with great results since 1979. Rotarians, together with the World Health Organization, UNICEF, the Center of Disease Control and the Bill & Melinda Gates Foundation in these years of activity have immunized over 2,5 billion children against polio and are reaching their goal of complete eradication of this disease from our planet.
After lunch, at 2 pm the connection via Zoom with the Rotary Club of Amman Cosmopolitan is established: there are warm greetings, representing all the members of the Club, brought by the President Michael Nazzal and by the Past President Ibrahim Kattan, National Coordinator of the Inter-Country Committees of Jordan, with which relations between the two clubs have been initiated.

Ibrahim Kattan starts a short presentation of the R.C. Amman Cosmopolitan which includes the most important services: among all the Gift of Life project stands out, an initiative to support children with serious heart problems.
Francesco Di Marco, President of the Rotary Club Verrazano (Brooklyn) (D-7255, NY, USA) and responsible for the project of cooperation with the Giannina Gaslini Pediatric Hospital in Genoa, is present in the videoconference.
For the R.C. of Genova speak:
- PRID PDG Giuseppe Viale, with a summary on the history of the R.C. of Genoa, and the salient facts connected to it;
- PDG Alessandro Pastorini, National Coordinator of the Inter-Country Committees of Italy, Malta and San Marino, to illustrate the inter-country relations between Italy and Jordan, whose agreement was signed on 8 June 2021;
- President Mario Riccomagno, with a concise presentation of the service projects of the R.C. of Genoa;
- Davide Bleve, President of the Club Contact Committee of the Club, with a brief description of the relationships maintained with other foreign Rotary Clubs (R.C. Marseille, twin Club, and R.C. Lugano). 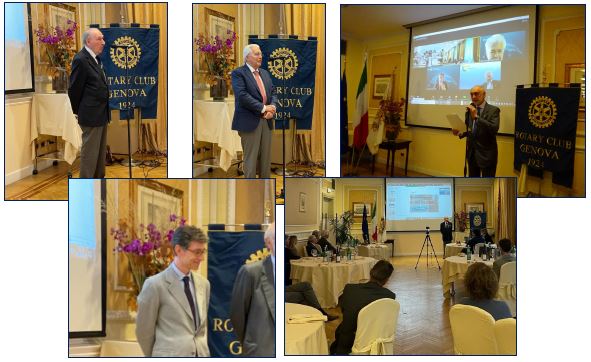 At the end of the two presentations, space is given to brief greetings and interventions by the participants in the videoconference and, after the mutual thanks of the Presidents of the two Clubs, the meeting ends at 3 pm with the usual ringing of the bell.
Heartfelt congratulations on this very successful meeting, excellently organized in the spirit of strengthening friendship, promoting peace, initiating and supporting service projects. 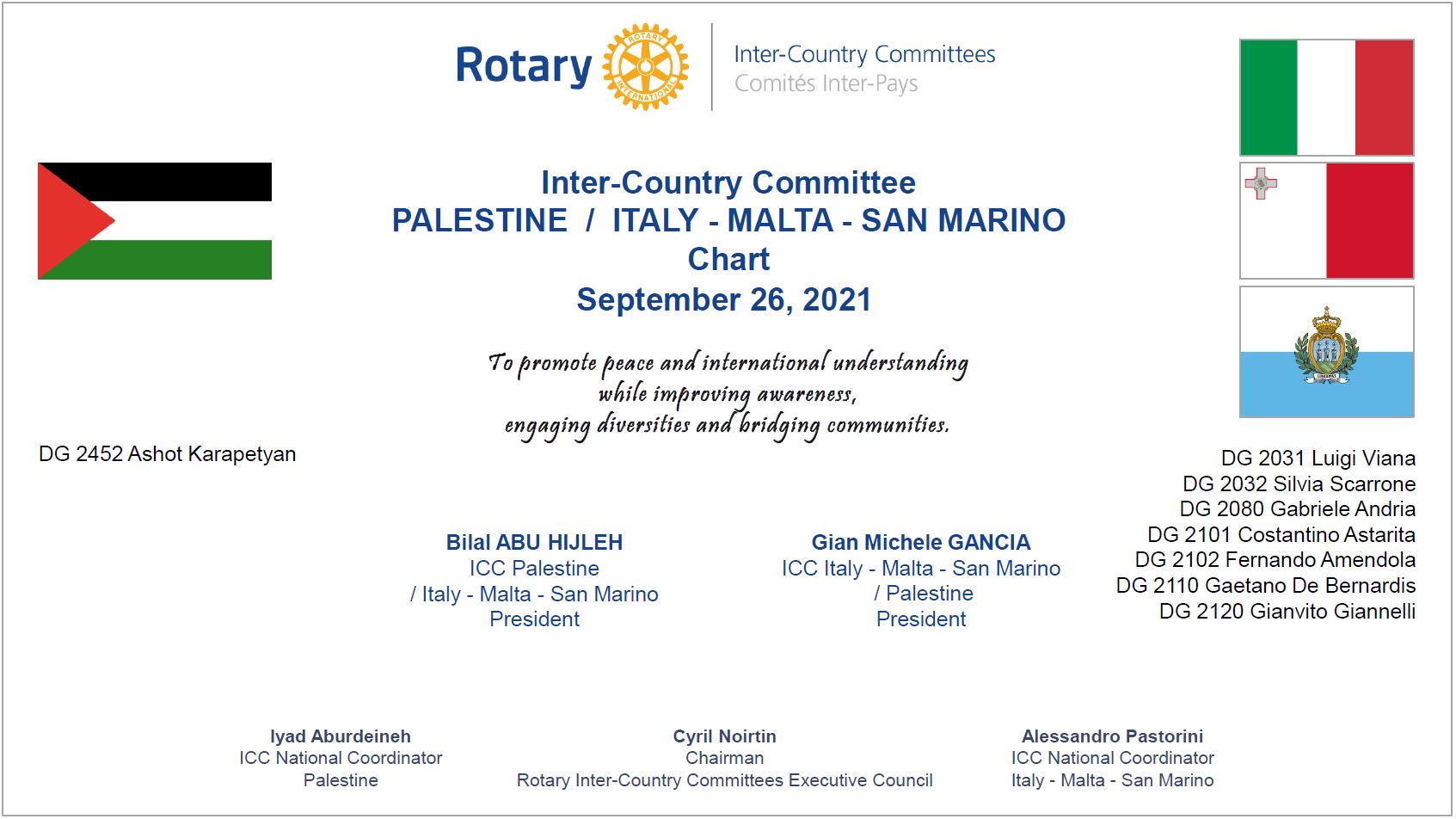 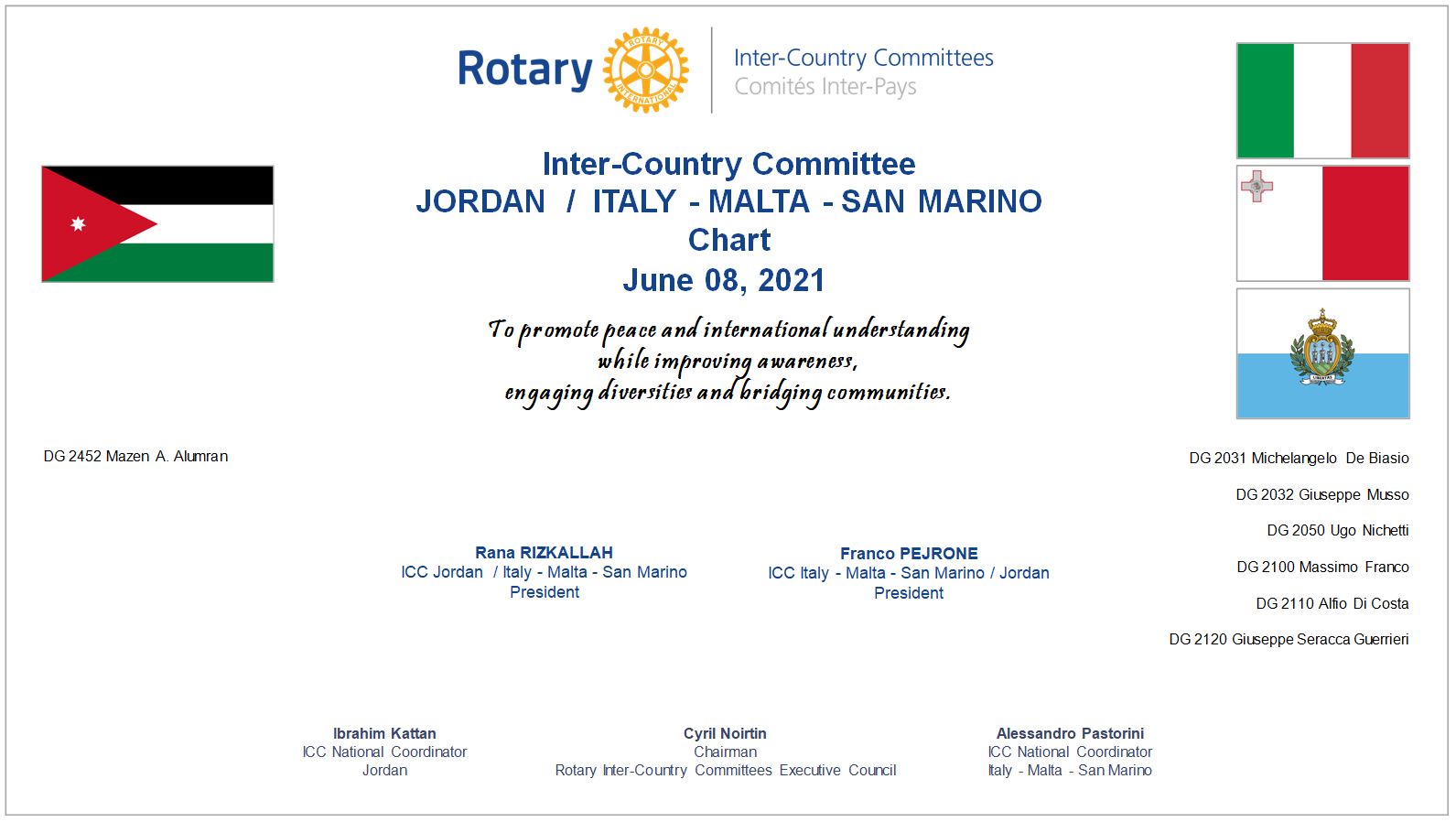 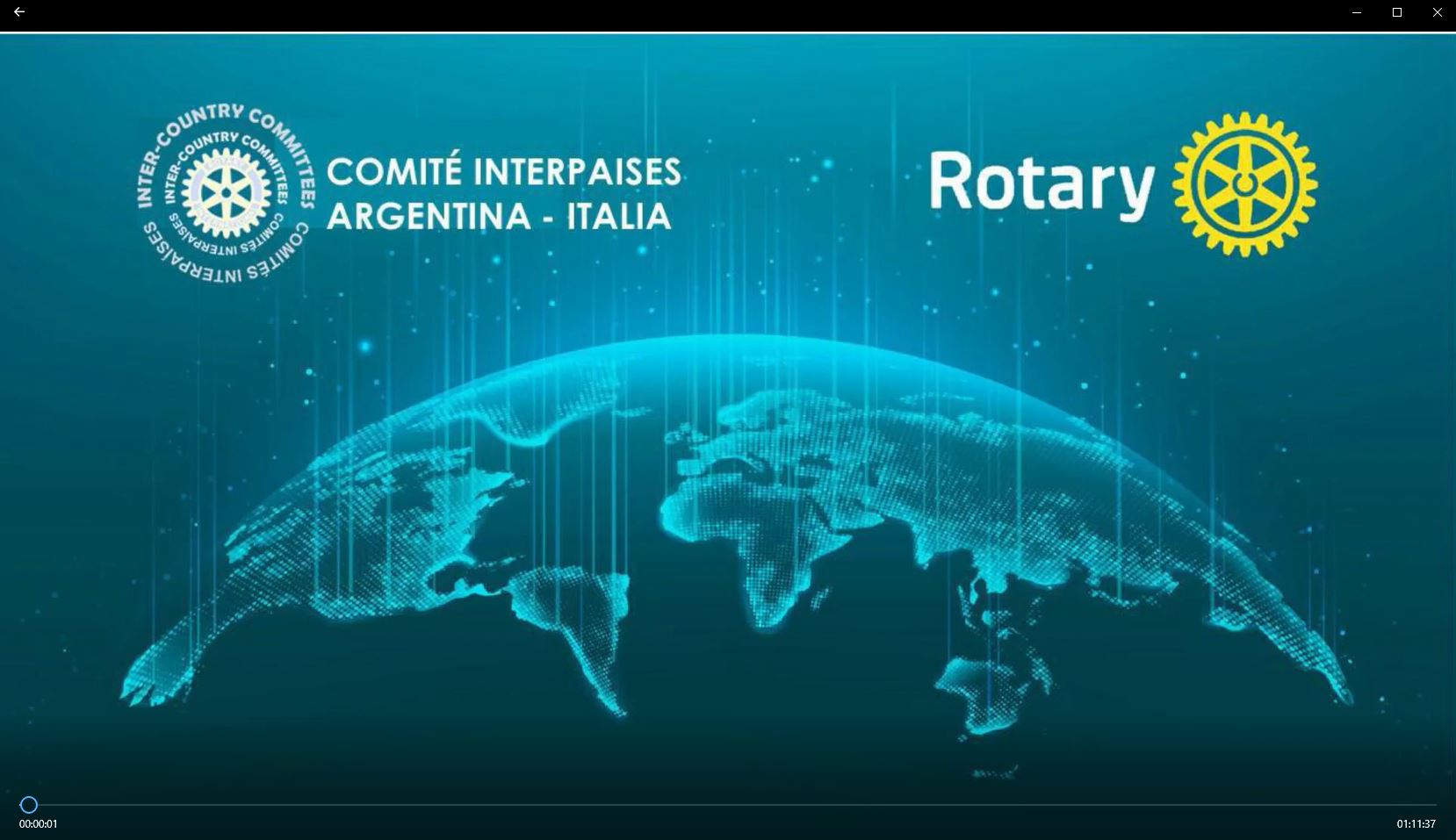 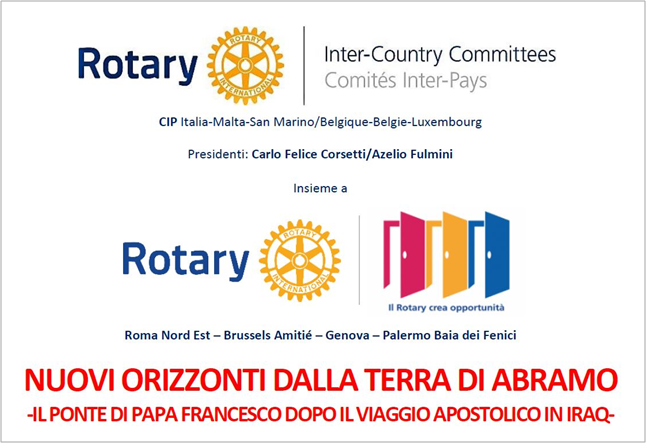 The online event "New orizons from the Land of Abraham - The Bridge of Pope Francis after his apostolic journey to Iraq" took place on the Zoom platform, organized by the ICC National Sections Italy-Malta-San Marino and Belgium-GD Luxembourg, whose Chairs are Carlo Felice Corsetti (R.C. Roma Nord Est, D-2080) and Azelio Fulmini (R.C. Bruxelles Amitié, D-2150).
The video conference was intended to reflect on interreligious dialogue, in particular on the recent Apostolic Journey of Pope Francis to Iraq, and was held in the presence of the speakers Stefano Girotti Zirotti, writer and journalist of Rai Vaticano, Abdellah Redouane, secretary of the cultural center of the Great Mosque of Rome, Martino Diez, professor at the Catholic University of Milan and director of the Oasis International Foundation, Paolo Alazraki, president of the Institute of Anthropology of Finance (Milan) and exponent of the Jewish community, former vice-president of the Ghetto of Venice.
The zoom meeting was attended by Bertrand Baranovsky, ICC General Secretary, Nathalie Huyghebaert, ICC National Coordinator of Belgium-GD Luxembourg, Alessandro Pastorini, ICC National Coordinator of Italy-Malta-San Marino, Giovanni D’Antino, President of Rotary Club Roma Nord Est.

---> Videorecording of the event 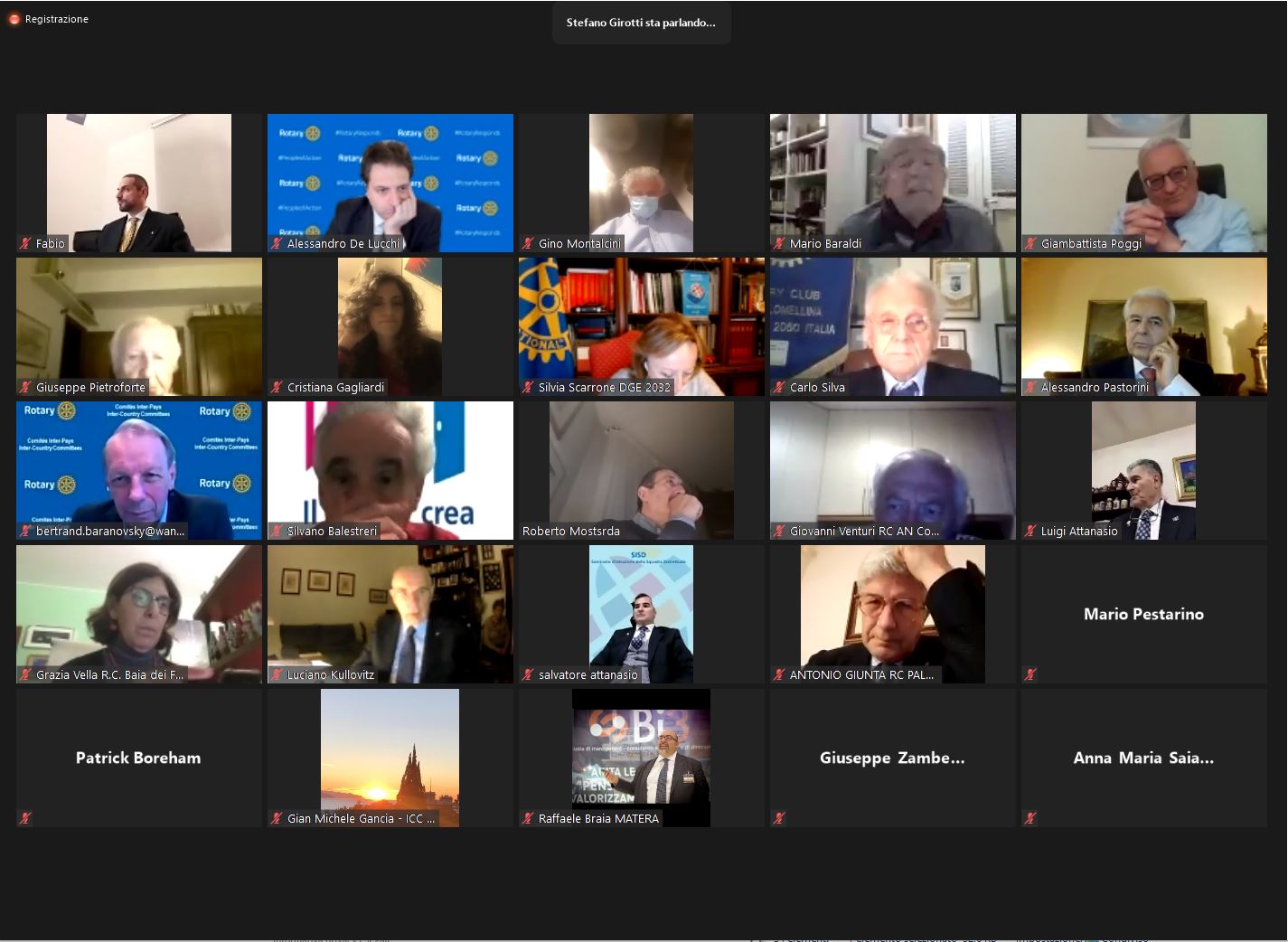