Origin of the Rotary Inter-Country Committees

Created in Europe after the two world wars between France and Germany, Inter-Country Committees rely on the bilateral relations between Rotarians to provide more opportunities to the global understanding, friendship and promotion of peace.
At the Rotary International Convention of Vienna in Austria in 1931 Past Governors Otto Boelher (RC Vienna, Austria) and Georges Benardot (RC Paris, France) laid the foundations of the “little French-German committee”. But this first committee was forced to finish its activity in 1937 due to the prohibition of Rotary clubs in Germany and Austria by the Nazi power.
After World War II, on May 23, 1950 in Strasbourg, at the conference of Rotary district 70 the governors Robert Haussman (RC Stuttgart, Germany) and Roger Coutant (RC Lille, France) officially create the first Inter-Country Committee between France and Germany. 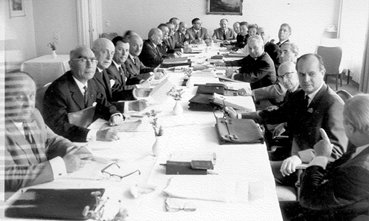 In that conference a resolution against the aggressions to human rights was also adopted by the 24 German clubs partecipants. That day, Robert Haussman stated that «Rotarians must be from now on at the forefront of the peace ideal».
After the creation of United Nations in October 1945 founded by 51 nations promoters, the year 1950 is emblematical: starting from the “Fifties”, the international and intergovernmental institutions, as expected, actually began to work, in order to ensure the expression of humanist values on which civilizations are based, for establishing between the peoples of different nations a climate of comprehension and solidarity for peace.
With this same spirit and with the same goal of consciousness raising the French and German Rotarians established the first Inter-Country Committee.

The first Rotary Inter-Country Committee between France and Germany

Highlights of the Rotary District 70 Conference at Strasbourg on May 1950.

Statement made by Robert HAUSSMAN on May 20th 1950 at  District 70 Conference at Strasbourg:
‘ District Governor, Your Excellency,
Ladies & Gentlemen,
Fellow Rotarians,
I speak in my capacity as representative of the Administration of German Clubs, a post that RI President Percy HODGSON asked me to assume when he visited German Clubs in August 1949.
In the name of the 24 German Clubs reformed during this year and according to the directives of the Board in Chicago, I thank DG COUTANT and the Strasbourg Club for their kind invitation. We are happy to renew contact after a separation of 13 years: following hose years of war and devastation throughout Europe.
I would especially like to thank DG COUTANT who, despite his very many responsibilities has been very willing to attend the first Conference of our future District 74. His words at Baden-Baden on May 18th had a profound effect on the German Rotarians gathered there.
In the same spirit of mutual understanding and in response to him, I must read out the resolution agreed by the 24 German Clubs in praise of the 4th Avenue of Service of Rotary (International Service):
« We must at this first reunion of our reformed Rotary Clubs pay tribute to the 4th Object which encourages the advancement of friendship amongst mankind, beyond political boundaries in the pursuit of international understanding,
This aim has always been in the hearts of German Rotarians.
It was due to their belief in this 4th Avenue of Service that Rotary was dissolved under the Third Reich, forcing our predecessors to meet secretly.
We German Rotarians condemn all actions directed against justice, morality and human rights, particularly all the hideous crimes and inhuman acts at whatever time and place they occurred and where they might happen again.
We deplore the sufferings resulting from such actions, now and in the future.
Above all, we are sorry for all that aggression which deprived people of neighbouring nations of their human  rights.
Now we can make a fresh start; Rotary International showing the right spirit and pre-empted the politicians, by reviving the Rotary Clubs in Japan and Germany before our Statesmen could even agree over Peace Treaties.
We German Rotarians are very grateful to RI. All Rotarians must be in the vanguard of the ideal of PEACE.
We shall not fail to collaborate when Clubs outside our frontiers offer us the hand of peaceful cooperation.» ’
(Prolonged Applause)

Then Roger COUTANT speaking to Paul Henry SPAAK said:
‘Your Excellency: you ask for actions. Here is the first – “The RI President is very much in favour of establishing new relations between France & Germany” ’.

Strengthened by these encouragements COUTANT and HAUSSMAN organised the first constituent meeting of our Committee in the Hotel Harlass at Heigelberg. Jean CARONI and KAMPE de FERIET together with HAUSSMAN, HEDINGER and BURGERS, all took part. Internal rules were adopted. Other biannual (twice a year) or biennial (once every two years) meetings will follow: Paris, Cologne, Marseille, Essen, Bordeaux, etc.

One of the first aims of the ICC France-Germany was to re-establish inter Club contacts. Considering the very recent carnage and destruction caused by the war, it might have seemed foolhardy to hope to get open agreement with such a policy. But this was to ignore the generosity, good sense and intelligence of the German and the French Rotarians. Indeed the first bond was between Lille and Cologne.

After the charter of the Inter-Country Committee between France and Germany in 1950 a network of ICCs developed in Europe and worlwide.

Starting with the twinning of clubs across countries, international contacts between Rotarians increased in a spirit of tolerance and comprehension.
Soon Rotarians, clubs and districts from the two countries of an Inter-Country Committee realized that only working together on common projects, actions and initiatives could further promote peace through improved communications and mutual understanding.
Today Inter-Country Committees are active far beyond Europe. More than 400 Inter-Country Committees in Europe, Africa, Asia, North and South America, Oceania are country based activities for direct bilateral humanitarian and peace efforts, using all Rotary International programs and initiatives with a priority on those, which can prepare the ground for peace between countries and within them.

Since May 1950, Inter-Country Committees have been helping Rotarians create a climate of friendship with clubs and districts of different cultures.

Since 1958, the governance of the Inter-Country Committees is ensured by the ICC Executive Council.